A strange post for me because I usually only share my crafting and sewing projects but I have been asked by a couple of people for the recipe to this banana cake I made for my Mum’s Birthday, so here it is!

My Dad is into making banana cakes and has adjusted and perfected a recipe from this 1977 Marks and Spencer’s cookbook! Theirs is more elaborate I would say but that’s just classic 70s.

So here is what you’ll need (in metric and imperial):
200g / 8oz self raising flour
1/2 teaspoon salt
100g / 4oz butter or margarine
400g / 1lb ripe bananas (this is usually 3 and they should be soft for mashing)
150g / 6oz caster sugar
2 standard eggs, lightly beaten
Sultanas, mixed fruit, nuts, cinnamon, ginger, 5 spice: whichever of these takes your fancy in whatever quantities. You could also use chocolate chips and decorate the top with Nutella.

For the icing:
150-200g spreadable butter (when using the piping bag there can be a lot of waste so I would advise to make quite a bit)
100-150g icing sugar (just keep adding until it tastes good!)
1/2 an orange

You’ll want to sieve the flour and rub in the margarine with your fingers until it has a breadcrumb consistency. Then mush the bananas with a fork and add them to the mixture. Add the lightly beaten eggs and the salt, caster sugar and whatever fruits and spices you choose. I usually just put in some sultanas, a tiny bit of ground almonds for sweetness and a pinch of cinnamon.

Then just pop the cake in a pre-heated oven at 180c / gas mark 4 for around an hour. Keep checking until it is golden, but darker than a Victoria sponge would be; it should resemble a fruit cake.

For the icing I used an electric mixer but you can obviously just mix by hand. The butter should be at room temperature to make it easier to mix. I chose spreadable because it tends to keep its shape more once piped as butter that comes in blocks seems to melt too much at room temperature and be too hard in the fridge. Mix the icing sugar in gradually and add as much as you feel is necessary until it is sweet enough. Add the juice of half an orange and stir.

To pipe, I just used a plastic sandwich bag and twisted it until the mixture was in the corner, then snipped the end off. You can use a professional piping bag or grease proof paper though.

I then made some bunting out of washi tape folded over some baker’s twine and cut into triangles. I used some kebab skewers to hold it in place. 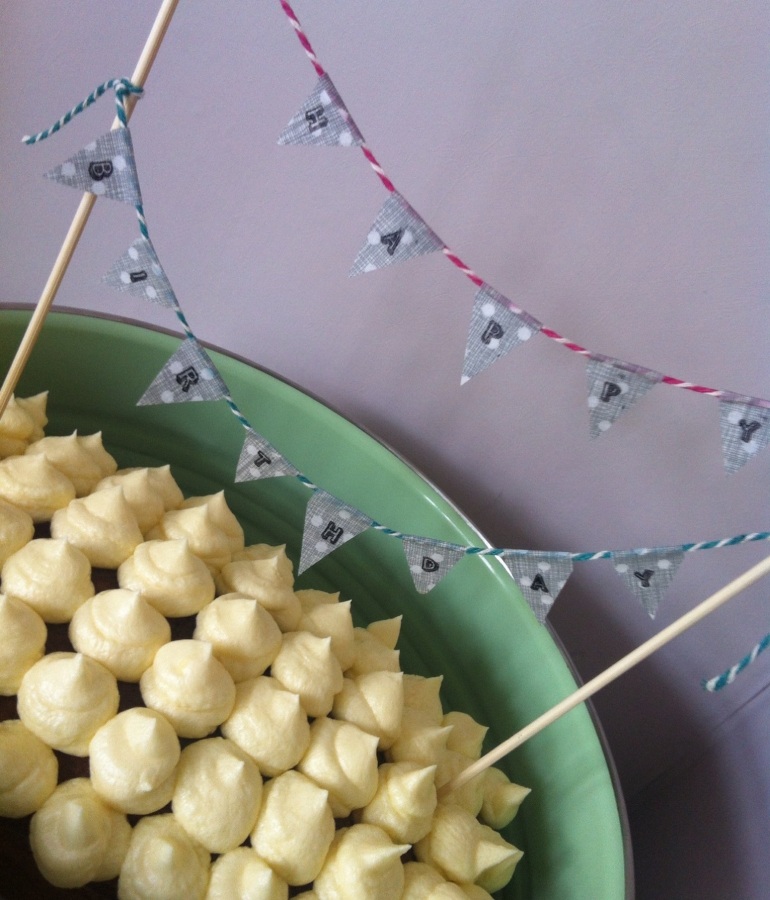 View all posts by kateevadesigns